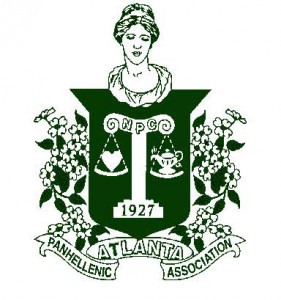 Atlanta Alumnae Panhellenic was founded on this date in 1927 at the Henry Grady Hotel.
Created as the Atlanta Women’s Panhellenic Association

The Atlanta Panhellenic Association’s coat of arms was designed in 1962 by Mrs. Raymond W. Dashiells (Alpha Chi Omega) and drawn by Mrs. Alan Abele (Delta Zeta).  Both members served as Panhellenic President – Mrs. Abele in 1937-38 and Mrs. Dashiells in 1962-63.

The lady at the top of the coat of arms represents a Grecian Goddess.  The Greek Column has NPC on it to show we are members of the National Panhellenic Conference and 1927 to show the year Atlanta Panhellenic was founded.  On the side of the scales, there is a heart of gold to show that they give help to others.  On the other side is the Lamp of Knowledge representing that we are an association of educated women interested in furthering the education of others.  The Dogwood Blossoms represent Atlanta.

The gavel used by the Atlanta Panhellenic Alumnae President was donated by the Panhellenic Association of the University of Georgia in May, 1963.  It was presented to Mrs. Raymond W. Dashiells by a former Dean of Women, Edith Stallings, Alpha Xi Delta.  The wood came from a tree from the Old College – 1804 (Athens, Georgia).